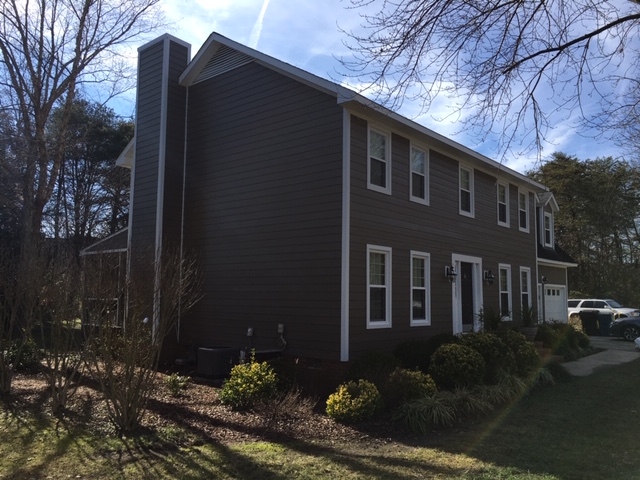 We were contacted back in September from a couple in Greensboro who was ready to start receiving estimates for the exterior of their home. They had been living in this house for some time and had noticed that their current siding was starting to rot from moisture throughout the years. Originally they contacted us wanting an estimate for only vinyl siding, but also mentioned they were open to other siding options as well. In the remodeling industry, it is pretty common for homeowners to rely on the advice of a siding company on what would be best for there home. After listening to the homeowners’ concerns and issues with their current siding, we knew James Hardie would be the best solution for them.

Not only were these homeowners looking to replace their siding, but they also wanted to update their windows. They were looking for an energy-efficient solution but one that was not going to break the bank as they were on a strict budget. Our team knew the perfect window brand to fit this homeowner’s wants and needs. However, to move forward with the estimating process, we would need the homeowners to capture photos of their homes through the Hover app. For those of you not familiar with our estimating process, we are able to create a 3d model of your home and an exact measurement report based on 8 or more photos. Once this was completed, we were able to move forward with the estimating process for this couple.

By the time October rolled around, our team received a call that the homeowners were ready to move forward with Hatch Homes for their exterior project. We sent them the proposal via Docusign and their project deposit invoice. Once this was complete we were able to add them to the production calander. After a few weeks, we were able to complete their project just in time for the new year!